The approach to the Climate Labs requires considering the territory and the universities' own practices and capacities. For this reason, the first purpose of this work package (WP2.1) was to identify the main strengths of the participating universities in terms of social innovation, a nuclear element of the incoming Climate Labs. The other heart of each laboratory will be its ability to address the climate change challenges in their territoriy. That’s why it has been connected the capacities of each university with the prioritized challenge.

As leaders of the WP2.1, the Polytechnic University of Valencia, Ashoka and the University of Valencia worked continuously during July-September 2020 in the design of an ad-hoc methodology for the mapping to be carried out in each of the universities and in their territories. Proposed as a visual, flexible methodological guide with a vocation to be adapted in each place, the methodology for mapping resulted in a relevant element to support the different motor groups involved in this process.

But as we well know, diagnostic processes happen thanks to the work of the people who undertake them. For this reason, in addition to some useful guidelines and tools for mapping included in the metodology, the team that has led WP2.1 has carried out a personalized mentoring to each university.

The methodology developed set down the mapping process, which was developed between September and December 2020, around three pillars: looking at each other, looking at and connecting. This has been the work philosophy during the diagnosis: (i) identify universities’ own capacities in terms of social innovation and the internal agents and institutions that will be added to this adventure; (ii) observe the territory and identify both the challenges in the fight against climate change, as well as the agents with which to start building alliances and incorporate in Climate Labs into the future; (ii) link capacities and challenges, to approximate as closely as possible which the main challenge the Climate Lab will respond (challenge that will be further specified during the next stage of the project).

The above was undertaken in the 10 universities of Colombia, Brazil and Mexico with great integrity, effort and energy, in a context of enormous difficulty due to the Covid-19 pandemic. The methodology already took this circumstance into consideration during its design, but it was a challenge to put it into practice, basically through virtual work and with the tensions that the pandemic has generated in each territory.

We can assure that the work has been very intensive, generating important learning by revealing new problems, identifying uninvited agents to date or enriching the understanding of a problem on which there was already research experience. The challenges facing climate change in each territory have been varied and deal with strengthening capacities in the face of vulnerability to floods and landslides, strengthening water governance, waste management, zero-carbon food production, conservation of pollinating species and the mobilization of interdisciplinary work in mitigation, adaptation and resilience to climate change. 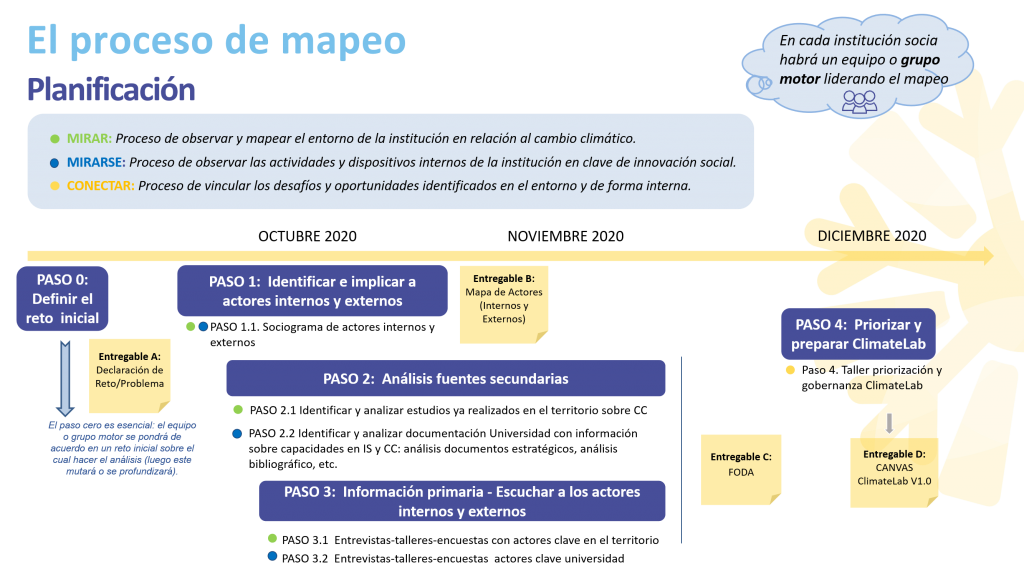